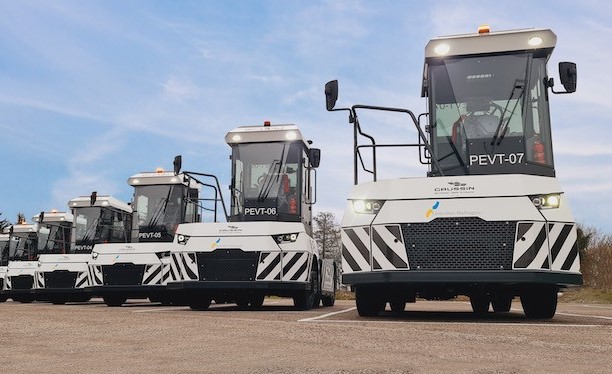 One hundred percent electric vehicles are now being used to move container cargo at Wellington’s CentrePort, thanks to investment from New Zealand Green Investment Finance (NZGIF).

After entering into a green credit facility provided by NZGIF, CentrePort has deployed seven French-designed and manufactured Gaussin transfer vehicles and trailers. Each unit is capable of moving two 20-foot containers and has a towing capacity of 75 tonnes.

CentrePort CEO Derek Nind says the vehicles are helping CentrePort towards its target of reducing carbon emissions by 30 percent by 2030.

"Reducing carbon emissions is a key aspect of CentrePort’s regeneration and our ultimate aim is to reach net zero emissions by 2040.

"The Gaussin vehicles also deliver other business benefits including supply chain efficiencies and lower running costs. That’s good for our customers as well as the environment," Nind said.

The vehicles replace diesel vehicles and will reduce carbon emissions by 230 tonnes per annum, around 8% of the port’s emissions annually. As well as assisting the port to achieve its climate change goals, it helps reduce the wider Wellington region’s carbon footprint, and provides an example for other companies in the port sector and beyond.

In June 2020, NZGIF committed $15 million to the facility in support of CentrePort’s decarbonisation and regeneration plans, providing the financing to ensure that lower carbon projects stayed high on the priority list, said NZGIF CEO Craig Weise.

"It is gratifying to see the fruits of our investment in this ground-breaking first for New Zealand. The recent Climate Change Commission advice highlighted that change needs to occur across all sectors of New Zealand’s economy. CentrePort’s ambitious decarbonisation programme, including these new vehicles, shows that decarbonisation can take many innovative forms".

The NZGIF green credit facility is financing a range of other initiatives at CentrePort including the reintroduction of rail carrying containers directly onto port after a gap of four years due to damage caused by the Kaikōura earthquake, reducing truck movements onto the port.

CentrePort Limited (CPL) is a transport and property infrastructure firm, built around its core port business on Wellington Harbour. With a staff of over 200 and working with a range of partners CPL provides supply chain solutions and expertise including the CentreRail Service with KiwiRail, and a network of inland cargo hubs. CentrePort facilitates international and coastal shipping, the inter-island Cook Strait ferry services, and land and aviation fuel supplies.

CentrePort is committed to environmental sustainability and this is a key element of the regeneration plan for the port.