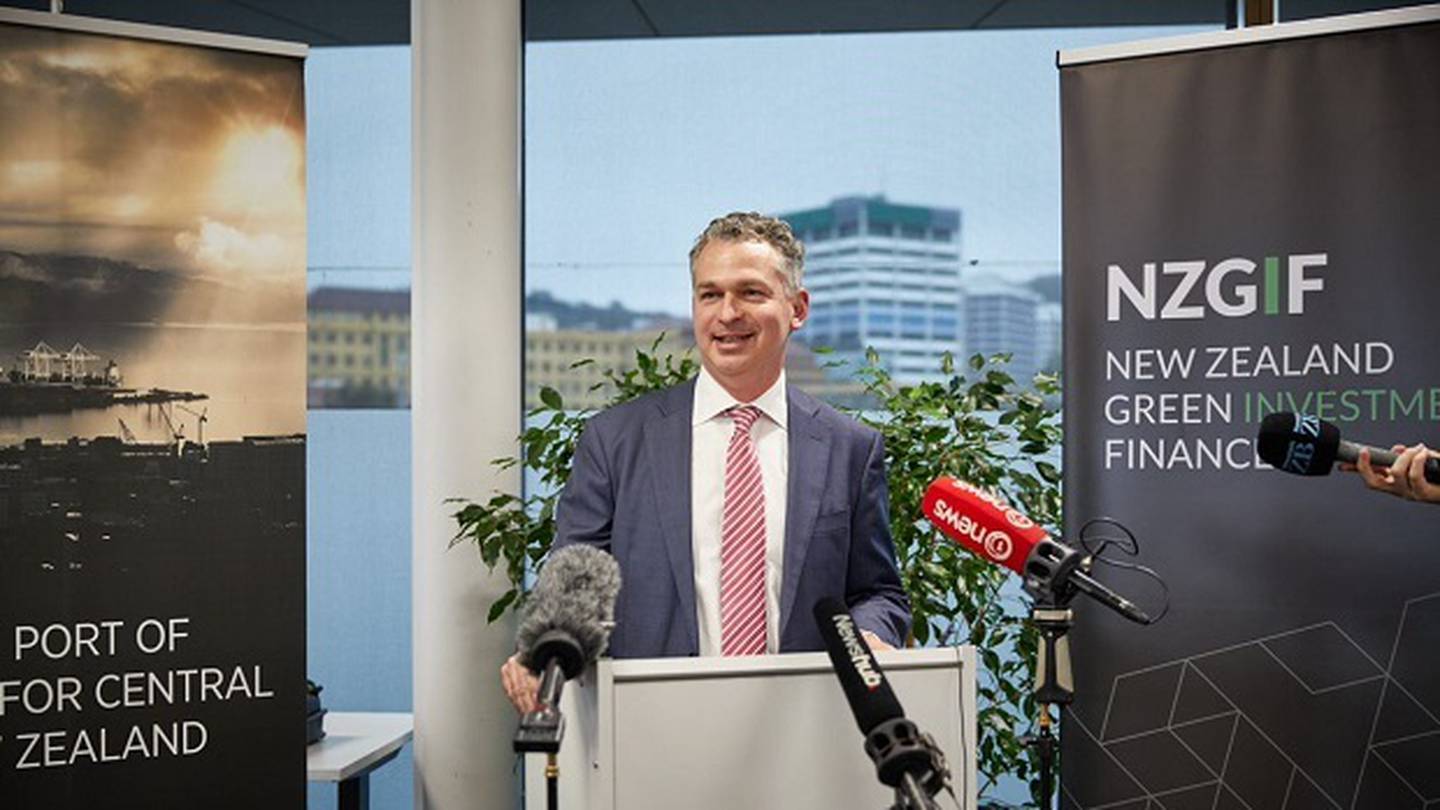 NZGIF CEO Craig Weise was interviewed by Tim McCready for this article in the NZ Herald's 2020 Sustainable Finance pullout.

New Zealand Green Investment Finance (NZGIF) was established by the Government to help New Zealand achieve a transition to a lower emissions economy, as part of a global movement to finance ways to mitigate the effects of climate change.

The green investment bank has an initial capital fund of $100 million. It is tasked with stimulating a market in which private capital flows to investment in activity that reduces our domestic emissions.

NZGIF's chief executive, Craig Weise, says one of the ways to do that is to lead the market by demonstrating not just the greenhouse gas benefits of its investment, but commercial and other benefits as well.

"I think that's one of the big aspects of our mission that is really important, which at its core is about acceleration of investment in lower emissions activities," he says.

Weise, who comes from a long career in private capital markets, says prior to taking the role at NZGIF, he knew how important it was to deploy capital in order to get the right environmental outcomes, and was waiting for the moment that would be able to occur.

"That's when you can start to make a difference in a big way. I've always been excited about that opportunity," he says.

Around the world, green investment banks have been established to catalyse private investment in domestic low emissions and other environmental projects.

"They are generally initially capitalised by governments but operate independently in the market to mobilise private investment.

Weise says internationally, green investment banks tend to focus on very different things to NZGIF because most economies are thinking about decarbonising their energy supply.

"For us, we looked at what they were doing, how they were structured, and what they were achieving — and then thinking about it in the New Zealand context, where we already have a lot of large-scale renewable energy, and it's very well capitalised in terms of the gentailers."

So far, NZGIF has made three investments: Thinxtra, an Internet of Things network and service provider; Carbn Group, supporting the uptake of low emissions vehicles in corporate and government-owned fleets; and CentrePort, a transport and property infrastructure firm.

Each of the deals NZGIF has done to date are quite different, and Weise says that — to a certain extent — this has been a deliberate move.

The deals that have been done help to illustrate to the market the breadth of what NZGIF can do, as well as signal the areas it sees as being economic and investible.

"It is not just about us deploying our own capital — it is also about showing the market that these things are there," says Weise. "It has been really important for us to go out and build institutional credibility in the market.

"Do the deals, let people understand us."

NZGIF can invest through a range of capital structures, from debt to equity, with mechanisms to mitigate risk for its partners.

It will be able to create solutions with the market that are hard for other institutions to do because of how it can use a balance sheet.

Its role will be different depending on what the need is. In some cases, it will need to aggregate sub-scale investments for bigger investors, because they may not have the incentive to write small cheques.

In other cases, NZGIF will get opportunities outside of corporate balance sheets that don't make sense on their own, but make sense when you start to pool them.

It will also be able to de-risk some projects — for example where it is the first time something is being done in New Zealand. While a bank might get stuck on a particular risk, NZGIF can take the risk on more easily, unlocking a deal that might have huge carbon benefits for the country.

"One of the things about the market in New Zealand is that because we're a small market from a capital markets perspective, some of those things are just a function of being a small market," he says.

"It's not only because there is an emerging understanding around low carbon and green investment — it's because we're a small market."

Weise says this flexibility is one of NZGIF's key points of difference as an institution. "We are not called a fund for a reason — because funds behave in very specific ways," he says.

"That is very powerful for us in achieving our mission, but it's also a bit confusing, because we have a lot more flexibility in terms of how we use the balance sheet, and we are operating over time horizons that are much, much longer than most funds would be thinking about."

That time horizon is not necessarily around the duration of the finance, but defines how NZGIF is thinking: helping New Zealand get to net zero emissions by 2050.

The investments made to date further demonstrate NZGIF's flexibility. The CentrePort deal is structured as a straightforward senior credit facility, where it is able to draw down money and pay NZGIF interest. The facility has a term, along with a set of rules around how the capital can be used and for what purpose.

The Carbn Group deal is an example of a hybrid investment. NZGIF has put both debt and equity into the company.

Weise says this is because the group is doing two different activities: one side of the business provides advisory services for government and corporates looking to optimise their vehicle fleets, the other side specialises in financing low emissions vehicles, with expertise in the economics of electric vehicles.

"With Carbn Group we saw a gap in the market that needed to be filled to help us to transition holistically," says Weise.

"And we liked it in particular because a lot of vehicles come into the country via fleets, and then into domestic use later on. It's a way to increase that uptake a little bit faster — coming back to our acceleration mission."

Weise says it is very encouraging that there continues to be a very healthy pipeline of opportunity: "You'll see us continue to make announcements on a fairly regular basis."

But he says beyond doing deals, NZGIF is very focused on bringing other capital providers along with it. It aims to work with a broad range of partners, including financial markets and investors, banks, private companies, local government and global green banking networks.

"NZGIF can't do it alone, because the delta is much, much bigger than its own balance sheet," says Weise.

"There are so many ways we can participate with the market.

"It's quite exciting as a practitioner, because it is on you to have that sort of flexibility," he says.

"We would encourage other institutions who see — or want — opportunity, to come and talk to us."

Investments made to date

CentrePort: CentrePort is a transport and property infrastructure firm, built around its core port business on Wellington Harbour. It provides supply chain solutions and expertise including the CentreRail Service with KiwiRail, and a network of inland cargo hubs. CentrePort facilitates international and coastal shipping, the inter-island Cook Strait ferry services, and land and aviation fuel supplies.

CentrePort was NZGIF's first investment, announced in June 2020. The green credit facility of $15m will be used to provide the finance needed to accelerate the deployment of low carbon projects, with the capital ensuring the projects remain a priority and are developed alongside the wider regeneration of the port. NZGIF's lending will be exclusively used to fund low-carbon projects which will reduce CentrePort's overall carbon footprint, such as the introduction of electric vehicles, on-site renewable energy generation and energy efficient upgrades. As well as assisting the port to achieve its climate goals, the investment in electrification, renewables and efficiency will provide an example for other firms in the port sector and beyond.

Carbn Group: Last month, NZGIF made a $5.8m investment in Carbn Group – the parent company of two subsidiaries that have been formed to support the uptake of low emissions vehicles in corporate and government-owned fleets. The Carbn Group addresses knowledge and capability gaps in the market for specialist low emissions vehicle transition, fleet optimisation and financing. Its goal is to accelerate transport emission reductions through the effective and efficient adoption of low emission vehicles.

In New Zealand, the transport sector accounts for around 19 per cent of GHG emissions. Transport is New Zealand's fastest growing emissions sector and emissions have risen by more than 70 per cent since 1990. However, momentum is building for low emissions transport technology adoption.

Carbn's services reduce the overall cost of a fleet and ensure continuous reduction of fleet carbon emissions by reviewing a company's vehicle types and usage patterns to assist them to transition to a low emissions fleet. This aligns with NZGIF's purpose and New Zealand's wider aspiration to reduce vehicle emissions.

Thinxtra: In August, NZGIF announced a strategic equity investment in Thinxtra, an Internet of Things (IoT) network and service provider operating an established network across New Zealand, Australia and Hong Kong. Its investment formed part of the company's latest funding round alongside other investors.

Thinxtra's technology supports firms to improve efficiency and asset utilisation, with clear carbon benefits. It has built, owns and supports the 0G Network, powered by Sigfox technology, which is low-cost, resilient and capable of supporting high volumes of connected devices, using very little energy to run. These devices allow companies to, for example, use less power, travel less and save carbon.

One example NZGIF gives of how the technology could be applied is the NZ predator free programme. Pest traps could be remotely monitored, meaning traditional scheduled checks in remote areas can be made more efficient by a smart trap triggering a check only when a predator has been captured. The same OG Network can be used to provide better insights into assets in the area, geolocation and safety of people (rangers and volunteers) and the overall health of the environment.

NZGIF says IoT provides a significant opportunity to reduce carbon emissions, and its investment in Thinxtra will help support a dynamic market leader to accelerate the deployment of its technology in New Zealand and enable firms to reduce their emissions as well as save money.

New Zealand's transition to a lower-emissions economy requires a major reorientation of public and private investment away from emission-intensive activities to those that support and catalyse low emissions energy, transport, building, land use and other activities.

There are economic benefits to be captured from the transition to a lower-carbon economy, including resilience, new and growing employment opportunities, and business competitiveness benefits from reduced operating costs.

Some of the obstacles in the New Zealand market that NZGIF aims to overcome include:

Read the full article on the NZ Herald website.