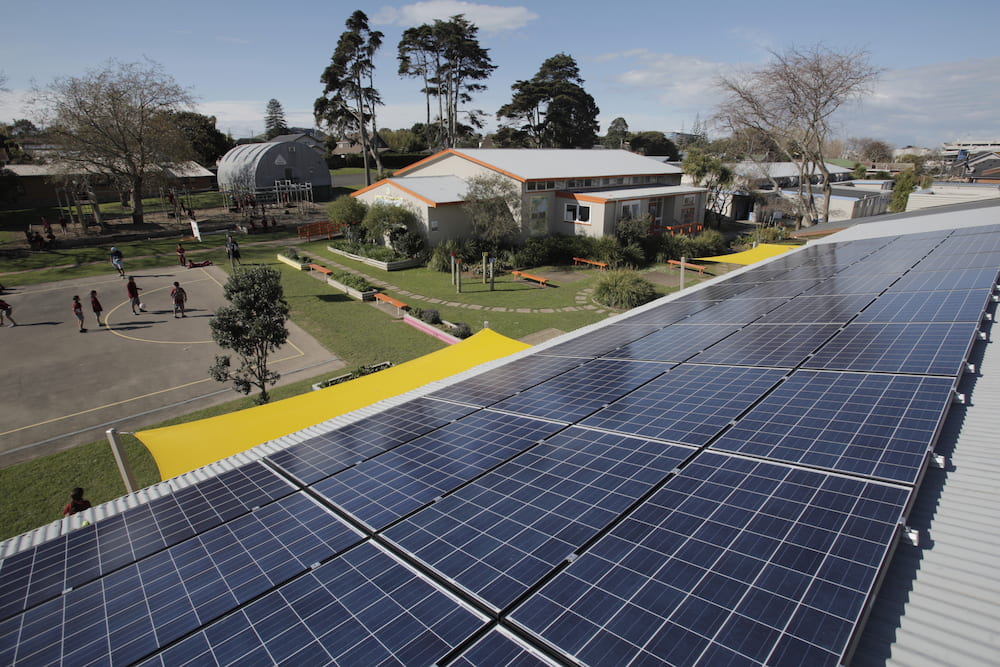 NZGIF is continuing its investment in solar by providing an $8 million senior debt facility to finance solar panels on schools across New Zealand, alongside energy services provider solarZero.

NZGIF is continuing its investment in solar by providing an $8 million senior debt facility to finance solar panels on schools across New Zealand, alongside energy services provider solarZero.

The new energy initiative, called solarZero Schools, will enable Kiwi schools to convert sunshine into solar energy to power their school and contribute to an increase in New Zealand’s renewable electricity generation capacity. solarZero Schools provides solar energy services to schools for no upfront cost and with long-term fixed costs at a price below the current cost of retail electricity, making it an attractive option for schools.

NZGIF has established an $8 million finance facility to fund the operation of solar panels on schools across New Zealand. It will do this by setting up a facility to provide financing for the installation of solar arrays (including operating costs) using power purchase agreements (PPAs). NZGIF is also holding $10 million in reserve for future extensions to the finance facility as demand grows.

solarZero estimates the potential generation capacity of the sector to be up to 200 MW of solar over time. This is equivalent to more than all of New Zealand’s currently installed photovoltaic solar power generation.

NZGIF is pleased to be supporting solarZero, who are showing real leadership in the market, according to CEO Craig Weise.

"By financing solar panels on schools, we are helping demonstrate in a tangible way to future generations what a low carbon world can look like."

"NZGIF’s finance will enable solarZero to deploy distributed solar across schools. This investment will accelerate the uptake of distributed renewable energy projects and contribute to the decarbonisation of the education sector," Mr Weise said.

A key feature of NZGIF’s facility is its ability to scale to meet demand across the education sector. The same facility also has the potential to finance solar PPAs with similar public sector counterparties without the need for duplicated costs.

solarZero CEO Andrew Booth says, "Tens of thousands of school students from across Aotearoa have called for action to meet the climate emergency head-on. Now, for the first time, there is no financial barrier to stop schools from going solar to lead the way for our communities' transition to 100% renewable energy."

Schools will also have the option to register their interest in installing a battery, which will improve the resilience of schools and communities in the event of a natural disaster.

solarZero is taking registrations for the Schools programme now and initial interest is high. School principals interested in the joining the programme can register their school via the solarZero website.

More details will follow once the first schools have installed solar panels under the programme in early 2022.

Earlier this year, NZGIF announced a $10 million investment in solarZero to support the growth of the company and boost its residential smart solar-as-a-service programme. NZGIF’s investment complemented an existing facility from Westpac NZ. More recently, NZGIF announced financing of up to $40 million in a commercial facility to fund commercial-scale solar installations.

With its origins in solar water heating innovation in the 1970s, solarZero has installed more solar systems on Kiwi homes and businesses than any other company. It was the first solar company in the world to achieve Toitū carbonZero certification and has held this green credential for 11 years running.

solarZero is one of the fastest growing green companies in New Zealand. solarZero’s investors include Sir Stephen Tindall’s K1W1 investment fund and Pencarrow Private Equity. An award-winning financing mechanism developed by solarZero and Westpac NZ, now bolstered with New Zealand Green Investment Finance’s mezzanine finance, locks in a fixed, low cost, inflation-free price for solar energy over a 20 year term, which removes any and all technology risk. Find out more at www.solarZero.co.nz.

What are the benefits for schools?
The solarZero Schools initiative offers a solar service with zero upfront costs, so there is no requirement to fundraise or apportion large capital investment, or maintain the system over its lifetime. It saves schools money by providing solar power cheaper than they can buy it from the grid, underpinned by a 20-year guarantee and maintenance programme. It maximises the solar generation potential of school roofs so that excess solar production contributes to New Zealand’s 100% renewable electricity targets. Further benefits include a reduced carbon footprint and educational opportunities for students on solar, sustainable energy and energy efficiency. Schools have the option to add a battery to the service to improve resilience in the event of a natural disaster.

How many schools will take part in the programme?
The number of schools covered by this new facility will be determined after initial feasibility assessments.

How does the solarZero model increase New Zealand’s renewable electricity capacity?
Because schools tend to sit empty on weekends and school holidays, they only consume electricity 55% of the days of the year. If solar arrays were to mirror consumption, they would be small and fail to maximise the generation potential of the roof. The solarZero Schools model installs large solar arrays that generate more electricity than a school consumes, contributing to New Zealand’s overall renewable energy and climate change goals.

What is a PPA?
A PPA (Power Purchase Agreement) is set up between solarZero and a school to formalise the purchase of power generated by the solar panels. PPAs have driven the deployment of renewable generation in many overseas electricity systems.

How does a PPA work?
The PPA is similar in nature to solarZero’s existing residential customer arrangements, in that solarZero provides solar as a service. There is no upfront installation cost to the school, and solarZero retains ownership of the solar assets, with revenue generated from the sale of electricity to the customer. Schools pay a fixed monthly fee which is lower than their existing costs.

What investments has NZGIF made in solar so far?

Will solar be suitable for all schools?
After registering interest for the programme, each school will be assessed for its suitability for solar. Not all schools will be suitable, for example some schools might have a lot of shading from trees.